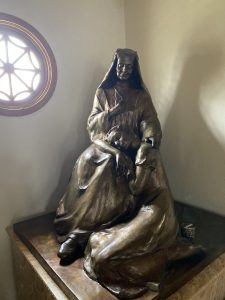 In 1990, a 12 year old 7th grade student at St. Bernadette was diagnosed with a debilitating disease called Tethered Chord Syndrome. This disease left her in excruciating pain and mostly bedridden over the course of the following few years, despite 3 surgeries performed to help alleviate her condition. On March 17, 1992 her family was informed that she was considered a surgical failure and that there was nothing more the doctors could do for her. The prognosis was she would be bedridden the rest of her life. She was 14 years old.

The principal at the time, Sr. Anne Elizabeth, a member of the Oblate Sisters of St. Francis de Sales, suggested to the family that perhaps the parish could begin a novena to Blessed Francis de Sales Aviat, her orders’ foundress. On March 22, 1992 the novena was begun. On the afternoon of March 25, 1992, her parents arrived home from work to find she was completely free from her pain and debilitation. Eventually her case was sent to Rome to be considered a miraculous cure. On December 18, 2000, Pope John Paul II declared her cure a miracle due to the intercession of Blessed Francis de Sales Aviat. On November 25, 2001 St. Leonie Aviat was canonized because of this holy and blessed event.

JOIN OUR EMAIL LIST TO STAY UPDATED ABOUT OUR PARISH!
Invite a friend so we can spread our good news!
Click Here for
Mass Schedule and to View Mass Online
Click Here for the
Church Bulletin
Parish Bulletin
Archive
Click Here for
Parish Giving & PREP Payments
What's Happening
at St. Bernadette's?